All Aboard the Origami Train “I never travel without my diary. One should always have something sensational to read in the train.”

The Flying Scotsman, the most famous steam train in Britain came to Norwich just before Christmas and I remembered this model.  I’ve been meaning to fold it for ages! Mooser’s Train is one of those ‘must-do’ models that I really wanted to make sure I did at some point, ever since I saw the crease pattern in Robert Lang’s book Origami Design Secrets. It’s quite an old model now (mid-1960s), but it’s a classic design and a very good example of a multi-piece 3D model, folded from a single sheet.

As Lang notes, Dr Emmanuel Mooser’s Train represents a milestone in origami design.  This model is an early example of origami box pleating in which majority of the creases run parallel to each other, instead of radiating out from one or more central points on the paper.

This is a high intermediate to complex model, requiring careful and accurate folding. It is possible to fold the train carriages independently and lock them together as part of the folding sequence, but where’s the fun in that? I’ve folded this one as Mooser intended – using a single sheet of paper.

Each carriage is folded from a rectangle that is 12 units wide and 10 units long.  The engine itself is folded from a 12 x 12 square.  Working on that basis, you can decide how big you want a unit to be and how many carriages you want. This determines the size of the paper you need.

I’ve folded Mooser’s origami Train out of a few different paper types – including ordinary printer paper, but I recommend a paper that is fairly robust for this model. That makes it easier to work with in forming the individual carriages and shaping the wheels.  I’ve made this one from a sheet of elephant hide paper, which you can get from the Origami Shop. (Click here to check price and availability at the Origami Shop.) I have seen it folded from a dollar bill, but I suggest you try using a larger bit of paper first! 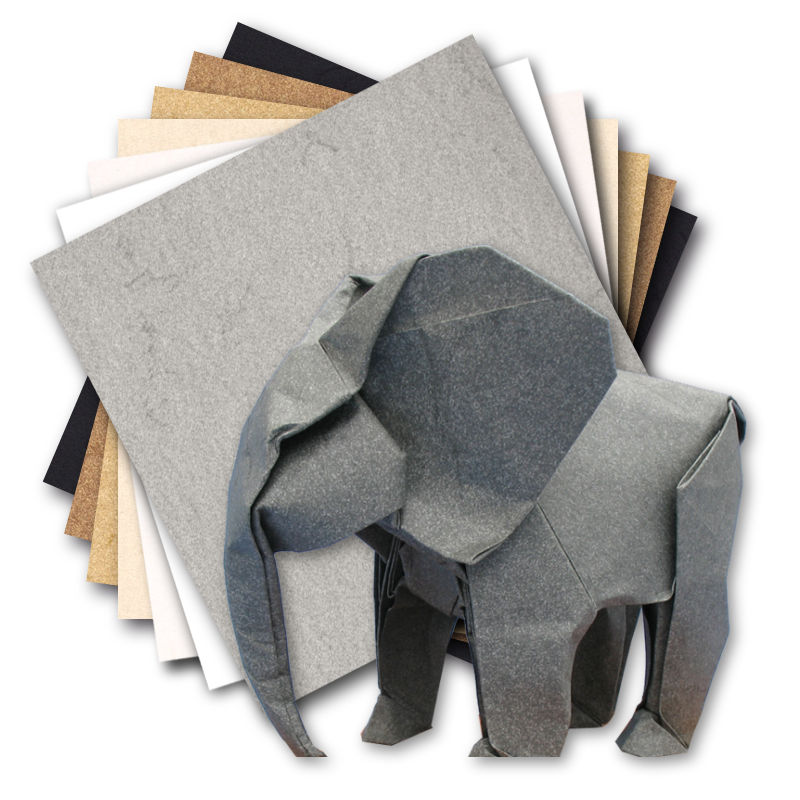 It took me a total of about 3 hours to fold this model, but I did do it in small stages over a couple of days.  The longest part of this is preparing the paper and either marking out the crease pattern on the underside, or folding the basic grid.

Once you’ve got the creases in place, you can make each carriage in turn by following the same sequence of steps.  Finally, you can fold the origami train engine itself. Several different designs of carriage are possible, I have used three of them.

The locomotive is the hardest bit of the model. Mooser’s original design called for a slit to be cut in the top of the engine and the funnel to be poked through. I didn’t want to do that, so my train has the funnel right at the front of the train. It’s personal preference of course, but I try to avoid cutting the paper in my origami.

There are a couple of sources of diagrams for Mooser’s Train.  The first is the crease pattern in Robert Lang’s book Origami Design Secrets. This is an expensive book but is worth every penny. As the title suggests, it’s primary focus is on understanding different techniques for designing origami models, but there are instructions and crease patterns for several beautiful models, including Mooser’s Train.

Lang’s instructions on how to make this origami train are brief, but he does dissect the crease pattern in some detail, so if you’re interested in understanding the mechanics of how this model is put together and more design principles generally, this is definitely the book for you. (Check prices and availability here.)

If you’re not into origami design and just want to fold the train, an origami artist called JC Nolan has produced a booklet that shows how to fold this model, including several variations for the carriages and the locomotive. This is available from Amazon. (Check prices and availability here.)

Nolan has also made diagrams available online, but it is worth getting a copy of the booklet for the full range of carriage variations, plus it’s good to support Nolan’s efforts in diagramming the model by paying the small amount of money for his booklet.

It’s a fun and challenging model to fold. Good luck with it if you decide to give it a go!

I’d love to hear your views on this origami train.  Feel free to let me know what you think in the comments below, or you find can me on Instagram or Twitter. Check out my Pinterest boards too!